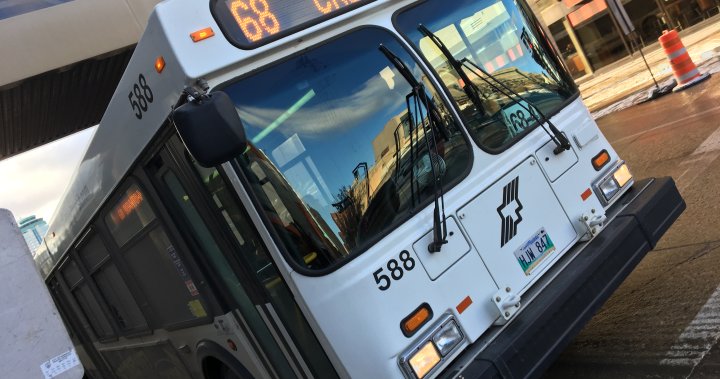 The attack on a Winnipeg transit driver — which forced him to run through a bus window — has prompted new safety shields on city buses.

The attack happened Sunday night near Portage Avenue and Camden Place after the driver asked a woman causing trouble to get off the bus.

Police say the woman pulled out a knife and tried to stab the driver around the plastic safety barrier.

The driver ordered all passengers to exit the bus before exiting through the driver’s side window. No one was injured and a 41-year-old woman has been charged.

Amalgamated Transit Union Local 1505 (ATU) President Romeo Ignacio explains 680 CJOB’s The News The union is seeing an increase in incidents where drivers are put at risk as safety shields installed on buses can be breached.

“I can recall at least seven incidents, you know, of people reaching into the driver’s compartment,” he said this week, adding that drivers on all routes have expressed concern for their safety.

“If a member is being assaulted with a weapon, there’s not much room in the driver’s compartment.

“We are asking for an extended shield. I think that would be the best way.

The safety shields currently used in city buses started being installed in the fleet for the first time in 2019.

A union spokesman says they are asking the city to install new, extended shields starting in 2020 because the current design “has proven ineffective against preventing someone from reaching the driver’s compartment.”

Schematics of a new shield created by NewFlyer provided to OlxPraca by ATU show a shield that extends further toward the front windows of the buses.

Police say they are looking for a suspect in the Winnipeg Transit attack.

A city spokeswoman said three models of shields were tested between 2009 and 2012 before an ATU survey found that most drivers disliked the barriers for reasons including airflow. Symptoms include decreased, increased glare and limited ability to interact with users.

A 2017 pilot project tested two more shields with 700 drivers, and the spokeswoman said the current barrier was selected from that test.

While the city’s transit advisory committee is discussing other safety shields as new designs come to market, the spokeswoman said it is “premature to share the potential outcomes of this discussion.”

Ignacio acknowledges that the shields currently installed on buses have prevented “major attacks” but says more protection is needed, noting that the driver involved in the latest attack told him he was “stabbed” with a knife. “Inches Away”.

“There was only one way he could, you know, try to squeeze through that window,” he said.