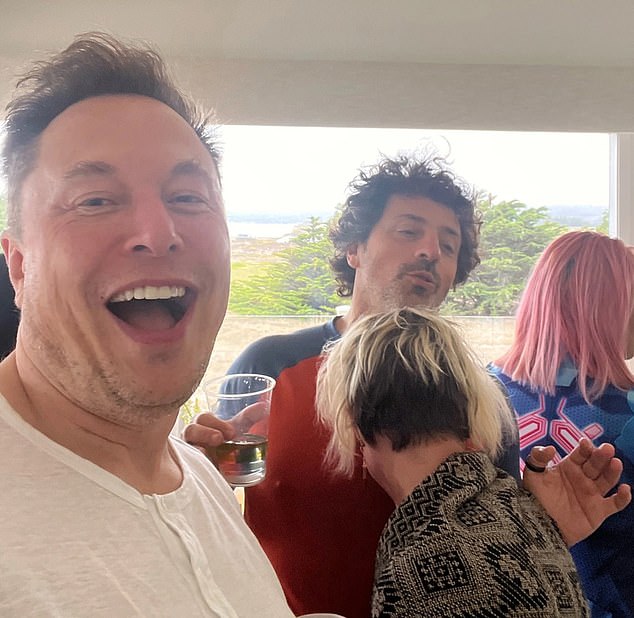 The invitation innocently specified fancy dress — ‘glamazon adventurer, safari chic and jungle tribal attire’ — but for those acquainted with the lavish parties thrown in mansions, chateaux and beachfront palaces around Silicon Valley, it was obviously going to be another of the technology elite’s monthly bacchanals filled with drugs and sex.

Guests at the ‘party on the edge of the world’, hosted by a prominent venture capitalist at his beachside home outside San Francisco, included Elon Musk, who wore a black armour-like costume adorned with silver spikes and chains. His old friend, Google co-founder Sergey Brin — another of the world’s richest people — went ‘bare-chested and in a vest’.

Despite his decidedly kinky outfit, Musk later insisted the do was ‘boring and corporate, with zero sex or nudity anywhere’. Perhaps he spent all his time in the kitchen, because a young woman at the event, who worked in tech, reported she found herself with two couples on the living room floor, which was blanketed with white faux fur and pillows.

Several people had already started stroking one another, she said, when she was offered powdered ecstasy in a bag — the drug is famously good at melting inhibitions between strangers.

After the Wall Street Journal reported claims of a sensational affair involving Elon Musk (left) and the wife of Google founder Sergey Brin (centre), Musk sent this image to the New York Post

She’d never taken it before. ‘They said it will just make you feel relaxed and you’re going to like being touched,’ she recalled, whereupon a tech entrepreneur asked to kiss her. It was ‘so weird’, said the woman, as his wife was right beside him, also encouraging her. When she fled, he continued to pursue her around the party.

Another guest at the same party, Paul Biggar, later said the sex party had been ‘way worse than it sounds’, adding: ‘We were warned before going not to be freaked out about the stuff there, no photos were allowed(!), and definitely don’t tell anyone what we saw.’

And yet when he was asked about the event, Elon Musk came over all injured innocence. Nothing untoward had happened. ‘If there are “sex parties” in Silicon Valley, I haven’t seen or heard of one. If you want wild parties, you’re in the wrong place,’ he told technology magazine Wired.

Referring to the nickname for those drug-induced petting sessions the woman had witnessed, he huffed: ‘Nerds on a couch are not a “cuddle puddle”.’

Brin, one of the world’s richest men, poses with wife Nicole Shanathan in Los Angeles, 2021

Today, Elon Musk is once more in denial mode over the sexual proclivities of the uber-nerd — this time over reports that he had a brief affair with Nicole Shanahan, the wife of Google’s Sergey Brin (the bare-chested one at that party).

‘I work crazy hours, so there just isn’t much time for shenanigans,’ he said, dismissing a report of the relationship by the usually solid Wall Street Journal as ‘BS’. Contrary to claims the affair had destroyed their friendship, he said he and Brin had been at a party together only the previous night, sharing a photograph on social media to prove it.

We have yet to hear from Brin about the saga. Or indeed from Nicole Shanahan — but then we rarely ever hear the women’s side in male-dominated Silicon Valley, say cynics.

Musk claimed on Twitter that he hadn’t ‘even had sex in ages (sigh)’, adding: ‘I’ve only seen Nicole twice in three years, both times with many other people around. Nothing romantic.’ Not that sceptics would say that ‘romance’ ever features much in the sordid culture of serial infidelity, blatant partner-swapping and rampant womanising that passes for relations with the opposite sex in Silicon Valley.

‘They think they are above the law because they think they are changing the world,’ said Emily Chang of tech billionaires, whose huge sense of entitlement she and others feel lies at the root of this toxic behaviour.

In her book Brotopia she describes parties at which men are allowed to bring as many women as they want — as long as they are accompanied by no other males. Some bring their wives or girlfriends.

As soon as dinner — occasionally eaten off the bodies of naked women — is finished, the drugs come out. The pills at these parties sometimes bear the logo of big tech companies.

As inhibitions disappear, guests form the so-called ‘cuddle puddles’, breaking away into couples, threesomes, or larger groups. Some will retreat to one of the venue’s many rooms; others don’t even bother doing that and start having sex then and there.

‘Night turns to day, the group reconvenes for breakfast, after which some may have intercourse again,’ said Chang. ‘Eat, drugs, sex, repeat.’

Many may not be surprised that the kings of the internet — home of limitless hardcore pornography, violent and sexually graphic video games, and vicious social media trolling — are a bunch of emotionally stunted young (and now not so young) men. After all, about the most famous of them — Mark Zuckerberg — started Facebook at Harvard University so that he and other male students could leer at pictures of their female peers.

Given what is said about Silicon Valley and the breakneck speed with which its rulers get through women, it’s surely possible that Musk – the world’s richest person whose estimated £208 billion fortune is largely based on his control of electric car maker Tesla – and his old friend Brin could have put aside their differences in public.

According to Amy Andersen, who runs a company that finds female partners for rich Silicon Valley executives, most of her clients impart a new meaning to serial philandering.

‘They’ll have a 6pm date, then a 9pm, and then a nightcap date; three in one evening,’ she told The Times. Sometimes, she said, they’d date all three women at the same time.

It makes the predatory studio barons of old Hollywood look like choirboys. After all, what ‘casting couch’ could hold up under the strain?

What is so extraordinary is that so few in the tech world seem immune to this sort of debauched behaviour. Even Microsoft co-founder Bill Gates, now busy saving the world from disease, hid a dissolute side behind those geeky specs and penchant for V-neck sweaters.

Last year, after his 27-year marriage to Melinda abruptly ended, with her calling it ‘irretrievably broken’, Gates was hit by allegations of naked pool parties, strippers, extra-marital affairs and the ethically questionable pursuit of female staff in his earlier years.

He later dropped out and moved back to his home city of Seattle to set up Microsoft, and would throw ‘wild bachelor parties’ at his home ‘for which [he] would visit one of Seattle’s all-nude nightclubs and hire dancers to come to his home and swim naked with his friends in his indoor pool’, wrote Wallace.

There are myriad other tawdry examples. In May, it was reported that a former flight attendant at Musk’s SpaceX company claimed the firm had paid her $250,000 (£207,000) in settlement after she alleged that Elon Musk exposed himself, rubbed her leg and propositioned her for sex during a flight to London. He denied her claims.

In 2014, Andy Rubin, who invented the Android smartphone software, was hustled out of Google after being investigated for sexual assault. He allegedly coerced an employee into performing a sex act on him in a hotel room in 2013 — a claim he denied.

Travis Kalanick, Uber’s former chief executive, boasted to GQ in 2014 that he was so rich he enjoyed women on demand. ‘Yeah, we call that Boob-er,’ he giggled. He reportedly once led other male Uber executives on a trip to an escort-karaoke bar in Seoul, South Korea, where they picked girls out of a line-up. The female executive left, appearing ‘visibly upset’.

But surely, as Elon Musk keeps emphasising in his denials, none of this is the likely behaviour of workaholic, Star Trek-obsessed uber-nerds?

It does seem, as the Starship Enterprise’s Spock would say, most illogical.

And yet it’s precisely because they are nerds, some argue, that they behave like this. Call it revenge of the geeks, but now that they’re super rich with egos to match, they’re making up for lost time, after years when their lack of social skills and gaucheness with women left them out in the cold.

An especially sleazy example of this behaviour is the pervasive Silicon Valley tradition of regular boozy lunchtime trips to local strip and bondage clubs — trips which female computer engineers say they are dragged along on by their male colleagues.

As dozens of women who had worked in the industry told Chang in Brotopia, it was all about the socially awkward outcasts of the school computer room trying to catch up after years of enforced sexual abstinence.

‘Many of the A-listers in Silicon Valley have something unique in common: a lonely adolescence devoid of contact with the opposite sex,’ she wrote.

The women in the industry who have privately spoken out cannot hide their revulsion at these men who seem convinced that their immense wealth now makes them irresistible to women who for years never gave them a second glance.

An unnamed Silicon Valley executive told Chang that his peers were so rich and their products so famous that the ‘guys who couldn’t get a girl in high school’ can behave as they want with women, and certainly don’t need to be pinned down to monogamy.

Of course, money and power can be heady aphrodisiacs, and some of the men who indulge in Silicon Valley’s sordid sex world counter that they are the victims, preyed on for their money by women they label ‘founder hounders’.

Their critics retort that this is just an excuse for their ugly, predatory behaviour.

Insiders have revealed that many tech barons like to take out their phones and show off the ‘trophy gallery’ of their sexual conquests.

‘They talk about diversity on one side of their mouth, but on the other side they say all of this s***,’ said a disgusted industry investor.

She mentioned a colleague with a smartwatch app that was just an animated GIF of a woman’s breasts ‘bouncing in perpetuity’, and another who kept a list of ‘the most bangable women in the office’.

Given this kind of atmosphere, even if Musk did have an affair with Brin’s wife, would it be so surprising, in the moral vacuum of Silicon Valley, if the two of them continued to be seen at parties together?

Certainly, Brin is hardly spotless himself. He was once dubbed the ‘Google playboy’ for his sexual involvement with his employees, prompting the company’s human resources manager to call his behaviour ‘a sexual harassment claim waiting to happen’.

In 2013, he separated from first wife Anne Wojcicki after he had an affair with a Google executive named Amanda Rosenberg. He was 40 and had two young children, while she was 27.

Former Google CEO Eric Schmidt was revealed to have an open marriage, and had reportedly soundproofed his New York love nest where he took his string of much younger girlfriends.

There’s a popular saying among women trying to find a husband in Silicon Valley: ‘The odds are good but the goods are odd.’

If we are to believe the shocking stories that emanate from the centre of the tech universe, ‘odd’ is a grotesque understatement.