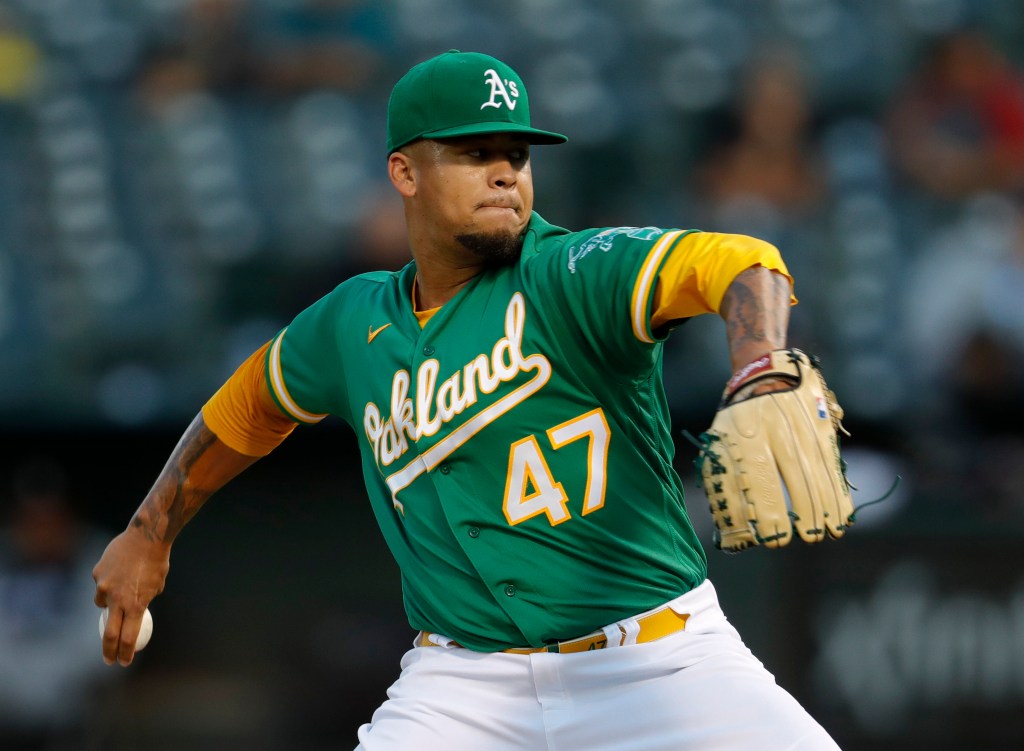 OAKLAND — Things are going in the right direction for A’s starter Frankie Montas, who reported no problems a day after returning to the mound after dealing with shoulder inflammation.

Montas was experiencing “post-pitching soreness,” A’s manager Mark Kotse told reporters before Friday night’s series opener against Texas. Kotse said his right-hander, a hot trade commodity, is “good to go” for his next start before the Aug. 2 deadline.

However, the A’s have yet to list a starting pitcher for any game in the three-game series that begins Monday against Houston at home.

Pitching for the first time since leaving his July 3 start after just one inning due to a shoulder problem, Montas pitched three innings against the Detroit Tigers on Thursday. He was pulled after throwing 53 pitches and striking out five batters. Montas’ fastball floated 96-97 mph to start Thursday’s game and hovered around 94 mph.

He received a no decision in Oakland’s 5-0 win in the second game of the doubleheader.

Scouts from around the league were on hand Thursday to see how the 29-year-old Montas would fare in his return. As one of the more appealing starting pitchers available on the market, the expectation is that Montas will be dealt.

Meanwhile, the A’s are eager to see another pitcher who just joined the roster.

Right-hander David McKay was recalled from Triple-A Las Vegas, while left-hander Domingo Tapia was sent back to Vegas.

The A’s are McKay’s third team this season, as he spent time back and forth between the Tampa Bay Rays and New York Yankees. McKay, 27, was claimed off waivers by the Rays on July 12. He has not allowed a run in his two relief appearances for Las Vegas and has a combined 3.45 ERA in Triple-A this season.

However, McKay hasn’t had much success at the big league level this year – he’s given up four runs in four innings.

“Right now, we’re trying to get him into a middle-innings role and figure it out from there, like all these guys have done, and give him a soft landing spot if possible and build his confidence. Will try,” Kotse said.

Zach Logue, who was the 27th man for the A’s doubleheader, was also optioned back to Triple-A.

According to Kotse, closer Danny Jimenez will have a 25-pitch bullpen session on Saturday and, if all goes well, will throw batters on Tuesday. Jimenez has been nursing right shoulder tightness since June 19.

Infielder Jade Lowry, who is on the injured list with a sprained left shoulder, looked good during live batting practice Friday.

Also, infielder/catcher Jonah Bride’s rehab is going well. He is hitting .400 with a home run and three RBIs on his rehab assignment. He has been on the injured list since June 17 with a strained right shoulder.