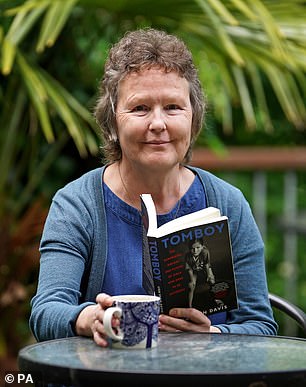 Stonewall responded to a tweet that said children as young as two could be transgender.

Stephanie Davies-Arai said: ‘There needs to be an urgent investigation into how this extremist organization was allowed to influence schools’.

LGBT+ charity Stonewall tonight clarified a tweet it posted over the weekend in which it claimed children as young as two could identify they were transgender.

The pro-trans group shared a Metro article about a ‘non-conforming’ four-year-old whose nursery doesn’t respect his behaviour.

Stonewall wrote: ‘Research shows that children as young as 2 recognize their trans identity.

‘Yet, many nurseries and schools teach a binary understanding of pre-assigned gender.

‘LGBTQ-Inclusive and Affirmative Education is Critical to the Well-Being of All Youth!’

It divided Twitter, with campaigners claiming the tweet was evidence of Stonewall’s ‘extremely ideological belief’ that biological sex does not matter.

Stephanie Davies Arai, director of Transgender Trend, said: ‘There needs to be an urgent investigation into how this radical organization was allowed to influence schools.’

But Stonewall responded tonight with a statement clarifying the original tweet, The Telegraph Reported

‘Whilst we do not actively work in nursery education, we believe that young children should be able to play, explore and learn about who they are, and what surrounds them, without having adults impose their views on them. The world around

‘We support existing provisions to ensure that primary and secondary school students learn about LGBTQ+ identity in an age-appropriate and timely manner.’

The news comes as government departments and public bodies have withdrawn from Stonewall’s Diversity Champions scheme to promote equality in the workplace.

Stonewall chair Sheldon Mills is the frontrunner to lead the Competition and Markets Authority.

Tory MPs and cabinet ministers have expressed concern over the group’s pro-trans agenda.

Its chairman, Sheldon Mills, is the front-runner to head the Competition and Markets Authority’s (CMA) Markets Commission.

But Mr Mills faces opposition among ministers, who must sign off on his appointment to the £195,000-a-year post.