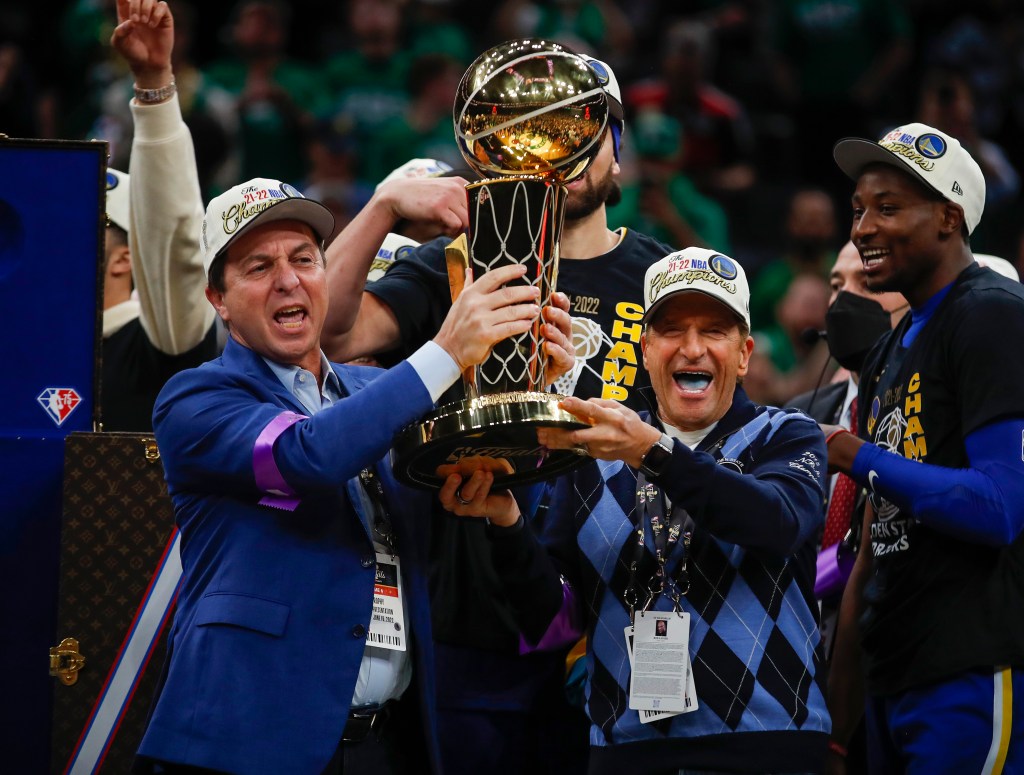 For many A’s fans, team owner John Fisher is the ultimate villain.

Fisher has cut the team’s payroll in half while raising ticket and parking prices for a dwindling fanbase to see his last-place team’s career toward the second 100-loss season ever in Oakland. But a recent revelation from one of the richest and most successful owners in sports points to the A’s troubles, former baseball commissioner Bud Selig.

Warriors owner Joe Lacob offered A’s fans a possible alternate reality, revealing that he once made a deal to buy the A’s years ago — only to have Selig torpedo it.

In “Long Schott”, a remarkably insightful book By and about former A’s co-owner Stephen Scott, co-author of John Shea of ​​the San Francisco Chronicle, Lacob talks about his failed deal to buy the A’s from Schott in 2005 for $180 million.

“I’ll Never Forget It” Lacob said to Shea, before pointing out that Selig not only threw the deal out of hand, the commissioner didn’t bother to call him back. “So I had convinced the Oakland A’s … and it was taken out from under me. I was really angry at Bud Selig.

“Nothing against Joe Lacob. I thought John Fisher and Leo Wolff would be a great combination,” Selig told Shay.

Now 83, Schott defines being successful and healthy as being able to do what he wants, when he wants. A longtime, hard-charging Bay Area homebuilder and land developer, that usually means working three part-days a week at his company’s office in Santa Clara.

That left him plenty of time for a recent phone conversation about one of the biggest “what ifs” in Bay Area sports history, even if Scott himself wasn’t taking the bait. Schott was more open to answering questions about his decision to write an autobiography – he wanted his grandchildren to have a reference point for his conquests, travels and labors – rather than A After 17 years of sales, what’s wrong with that?

Schott knows exactly what Fisher is going through, as he too was once a cost-conscious, A’s owner who couldn’t seem to find his way out of the Coliseum and into a new ballpark.

For Fisher, concrete solutions to a dilapidated stadium, dwindling crowds and mounting losses may still be years away. Meanwhile, Fisher simultaneously lives up to his risk of moving to Las Vegas and his hopes for Howard Terminal Ballpark while presiding over his team’s giant mess in Oakland.

“I’m not here to criticize what’s going on with the A’s,” Schott said of Fisher’s plight. “I don’t know what they’re trying to do, if they want to move or not. That’s not my headache.”

Despite Lacob’s growing acumen as a team owner, Schott was unwilling to play down the history of revisiting his failed deal with the Warriors owner.

“Gee, I don’t know,” he said when asked if the A’s would have been better off if he had been allowed to sell Lacob. “I don’t want to speculate. But (Lacob) definitely landed on his feet very well.

Still, there’s no escaping Selig’s misguided belief that Fisher and Wolff were more worthy of the A’s, Oakland and the team’s fans than Lacob. Can you put a price on what the cost of most of the mistakes and miscalculations in the 17 years under Fisher and Wolff has already been?

How about Lacob countering this with the transformation of the Maury Bund Warriors franchise into a four-time champion and perhaps the model organization in all of sports?

“I think it’s sad that we haven’t had an A’ at any point in the last 17 years,” said Lacob, who also revealed that he’s had more than a decade of constant buying A’s from Fisher. There was an offer. “I think we would have done a pretty good job with the A’s. But look, obviously I’m biased.”

One thing is certain: the old commissioner’s denial of Lacob was one of the decisions that showed Selig was never Oakland’s key.

Selig, who retired before the 2015 season, has said for years that allowing the A’s to move from Kansas City to Oakland in 1968 was a “terrible decision” and the “worst mistake” baseball has ever made. He did not believe the Bay Area could support two baseball teams, despite both the A’s and Giants enjoying long periods of success, drawing more than 2 million fans each year.

During his 23-year commissionership, Selig also created a pair of blue-ribbon panels, each heralding doom for the A’s.

In 2000, Selig’s Blue Ribbon Panel on Baseball Economics recommended that the A’s and Twins franchises contract to save money. During that time, Schott and Hofmann negotiated a tentative agreement to sell the A’s to a local group headed by Bob Piccinini, the late chairman of Modesto-based SaveMart Supermarkets, and frontman Andy Dolch, a well-known former A’s team executive. .

Piccinini and Dolich’s group had designs to build a new A’s stadium on the Coliseum’s 120-acre property. But, Selig made his offer.

After that, things turned magical in Oakland as the 2000 A’s began a four-year run in the playoffs that created the “Moneyball” brand that led to a movie starring Brad Pitt.

“Then baseball said, ‘How do we sign a team that’s going to be popular?'” Dolch said of the A’s in return for saving the franchise.

Selig’s second blue-ribbon panel, established in 2009 and ultimately disbanded five years later, had the most devastating impact on the A’s. It included South Bay territory rights and whether the A’s would be allowed to move into territory the Giants considered. While awaiting the results, Fisher and Wolff were confident they would use the 13 ½ acres of land near the Derridon train station to build a $500 million ballpark in San Jose.

Long story short, Selig considered the panel’s long-awaited findings and immediately put up a permanent roadblock to prevent the A’s from getting there. When San Francisco was looking for a new home in the early 1990s, it decided to honor the rights granted by the A’s as a gesture of goodwill.

The argument was personal for Schott. A few years ago, the Santa Clara-born businessman was pursuing a potential deal with the city to bring him to his hometown, along with Great America, where the 49ers were moving in 2014, for baseball only. Build a ballpark.

“I knew the city-owned land well enough that the A’s would thrive there,” Schott said. “I was in discussions with the Santa Clara City Council, who was on board.”

Unfortunately for Schott, neither Selig nor MLB were on board with Santa Clara. The denial turned out to be one of the main reasons Schott decided it was time to get out of baseball. It didn’t help that he and Hoffman often clashed over baseball decisions or that his ownership group was constantly targeted by fans and others for not investing enough in the club.

“I made the mistake of saying I was going to set a budget because I had no interest in losing my personal money. I got really criticized for that,” Scott said. “But I decided, ‘Here’s the budget,’ and that’s how Moneyball started because Billy had to stay within the budget.

“It worked out. Where there’s a will, there’s a way sometimes. … It was a fun run when we had it. We almost won a few championships.