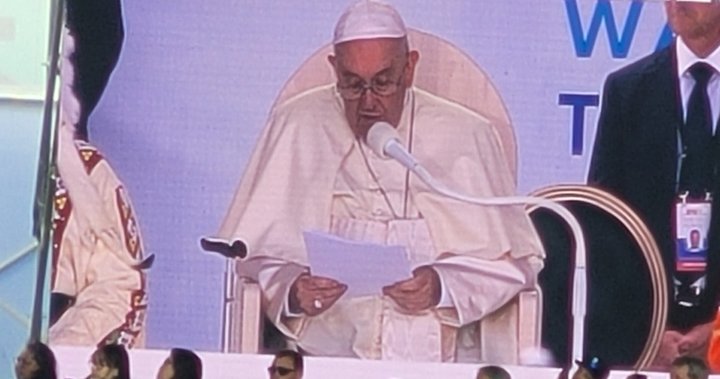 Pope Francis uttered the words “I am so sorry” on Canadian soil as he addressed survivors and families of the wrongs and harm caused by Indian residential schools run by the Catholic Church.

During his address, the Pope referred to a pair of baby moccasins presented to him during a local delegation in Rome, which took place in late March 2022.

“I would like to reflect on this symbol, which has kept alive my feelings of grief, anger and shame for the past few months,” Pope Francis said. Emphasizes that we work to ensure that every child is treated with love, dignity and respect.

“Those moccasins also speak to us of a path to follow, a journey we want to take together.”

It was a gesture from retired Okanaise First Nation Chief Mary-Anne Day-Walker Pelletier to extend her commitment to visit Canada, apologize, and visit the residential school’s grave.

“I’m relieved the moccasins have been returned,” Daywalker Pelletier said. “The words he spoke are really in the context that he really understood the unmarked graves and the children who were lost and died. He really … (strongly) offered what I did in Rome. was.”

In late March, Daywalker Pelletier presented Pope Francis with baby moccasins to represent the children who were taken from their families and placed in Indian residential schools where many never returned home.

“He made me realize that he is a very humble person, very kind and very responsible,” she said. “I saw a lot of survivors and a lot of emotions came out, but I think a lot of people felt very emotional asking (them) for forgiveness.

May Desnomie from Peepeekisis First Nation is a residential school survivor. She was one of the guest speakers who addressed the Pope before apologizing. The day was too big for him and he still hadn’t processed everything.

“I had a lump in my throat (to think) that he actually came here to apologize to me,” Disnomie said. “I took it personally. Now that he was on Canadian soil, I felt like he was talking and apologizing to me.

However, not everyone shared the thoughts and feelings of the remaining survivors. Barry Kennedy, a residential school survivor in Maryvale, did not attend the Pope’s visit but expressed his dismay when he learned that the Pope was visiting the former Grand Chief of the Treaty Six First Nations and the Truth and Reconciliation Commission. The headdress is presented by the member. , Wilton Littlechild.

“Headdresses are very important in our traditions and culture. They are worn by leaders that we respect and follow,” Kennedy said. “To me, it’s a shame to give him a headdress. After he (ends his tour), it will remain the same… nothing is going to change.”

“People were moving in the audience … you could hear it and see it. It opened a wound and we can’t leave it like that,” Chief Alexis said. “You can’t just say I’m sorry and walk away. Let’s go… there’s still more to do.”

In his speech, the Pope said that apologizing is not the end of the matter, but the first step and the starting point.

“An important part of this process will be to seriously investigate the facts of what happened in the past,” Pope Francis said. “I will continue to encourage the efforts of all Catholics to support indigenous peoples … my presence here and the commitment of the Canadian bishops is evidence of our desire to remain steadfast on this path.”

If you or someone you know is a residential school survivor and is looking for help, you can call the Residential School Survivors and Family Crisis Line at 1-800-721-0066.

4:50
Pope Francis’ address at Sacred Heart Parish: ‘I have come to visit your home’

Pope Francis’ address at Sacred Heart Parish: ‘I have come to visit your home’