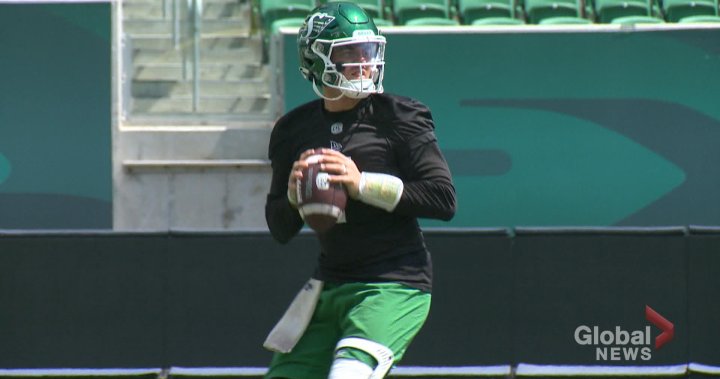 These were Cody Fajardo’s first words to the media after missing week seven action due to a serious knee injury and covid.

He wants to start Friday night when his Saskatchewan Roughriders take on the BC Lions.

But it remains to be seen whether the choice is his or not.

“I think it might depend on other people,” he admitted. But, if it’s up to me, I’m playing. Perhaps I spoke too soon by saying that I would definitely come there.

Third-string quarterback Jake Dolegala will start for the Saskatchewan Roughriders on Sunday.

In his week away from the gridiron, Fajardo had a bit of a slap in the face with his teammates getting back on the field, taking snaps and making plays.

“I miss it, you don’t know what you have until it’s taken away from you,” Fajardo said.

The 30-year-old signal caller’s optimism about returning to play this week was backed up by his head coach, who also expects his starter to return under center.

“I think he can go, but I thought he looked good, he was in rhythm, it was good to see him back out there,” head coach Craig Dickinson said. “Today’s practice, even though it was short, it was productive and we got a chance to see him get a rhythm with our receivers.

After practice, both Fajardo and Dickinson broke their silence on the knee injury that has been ailing the starting quarterback, something they haven’t done since the injury first occurred in week two.

When asked if there was any ligament damage, Fajardo was quick to give a short answer.

Meanwhile, his coach added to the injury.

The Saskatchewan Roughriders are pushing the weekend game to Sunday.

“It’s an MCL, unless there’s something new from today, I don’t know,” Dickinson said. “Yes, we know he’s got some ligament problems and hopefully it will heal itself and he’ll be able to play.”

Fajardo made one thing abundantly clear during his availability: His missing game last weekend against the Toronto Argonauts was strictly a COVID issue, not injury-related.

“It wasn’t my knee that was holding me back, it was the Covid protocol,” he explained. Getting there without any practice.

“(COVID) kicked my butt for 48 hours, it was really hard for me, I had every symptom you can think of.”

Although the spotlight was focused on Fajardo, he wasn’t the only rider back in the fray on Tuesday.

He was joined by receiver Duke Williams, who returned from a one-week suspension after a helmet-throwing incident in Atlantic Canada’s week six loss to the Argonauts, for which he apologized to Roughriders supporters.

“I apologize to Rider Nation, I apologize to my teammates, the fans,” he said. “I’m out of character and it won’t happen again, but at the end of the day, that’s all I’m sorry for.”

Williams added that he vehemently denies the Argonauts’ allegations that he spat at Shaq Richardson multiple times during the game.

“If you’re not a dog and you’re weak, you make excuses, that’s what you do,” he said. “That’s what he did: made an excuse, because I kicked him out and at the end of the day he made an excuse.

“I didn’t spit on anyone and that’s it.”