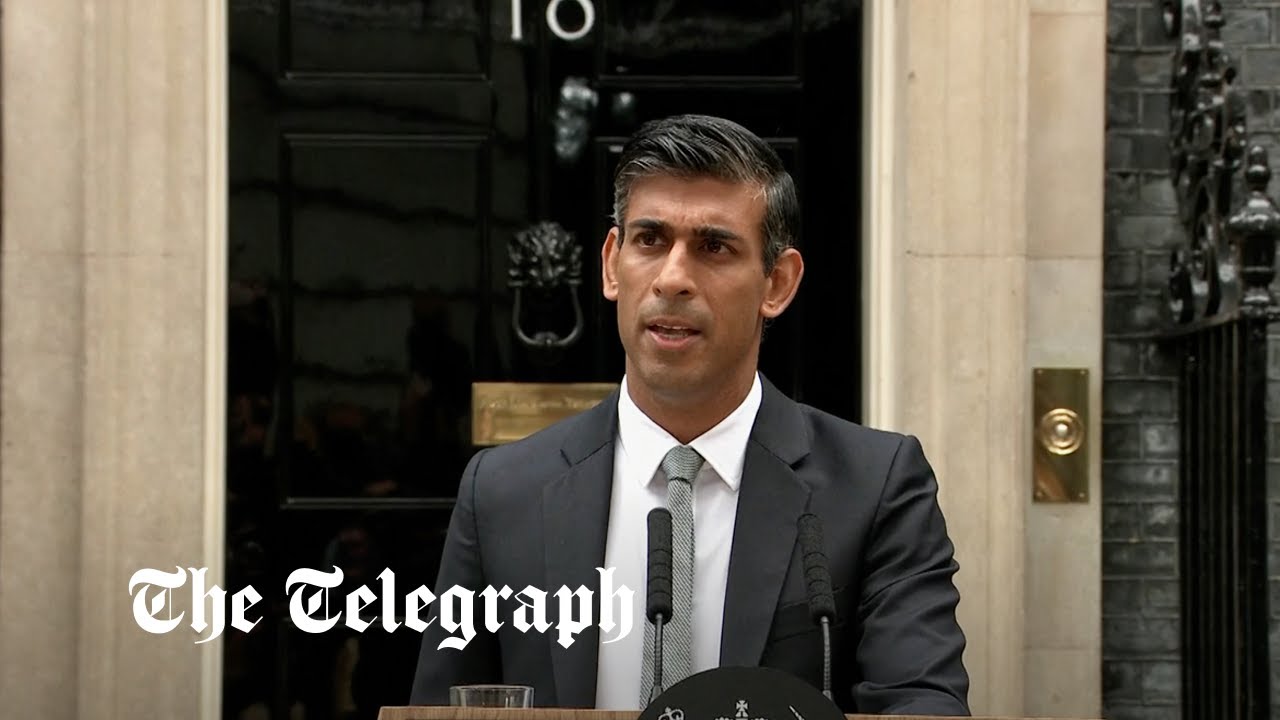 Mr Sink then listed the government’s manifesto pledges, saying they would “promise to build a stronger NHS, better schools, safer roads, control of our borders, protection of our environment, support for our armed forces, equality and the economy”. “Brexit’s opportunities will be met, where businesses create investment, innovation and jobs.”

He also used his speech to say he would put “economic stability and confidence at the heart of this government’s agenda”.

In a sign that spending and potential cuts will come under pressure, he warned there were “difficult decisions ahead”.

But Mr Sink promised to “bring the same compassion” to Downing Street that he brought to his role as chancellor during the pandemic.

“You saw me doing everything I could to protect people and businesses during Covid with schemes like furlough. I promise you this: I will bring that same compassion to the challenges we face today,” he said. .

Pointing to rising inflation and the inflation crisis, the new prime minister said he “fully appreciates how difficult things are”.

He said he was “not panicking, I know the high office I have accepted and I hope to live up to its demands”.

Mr Sink added: “But when the opportunity comes to serve you cannot question the moment, only your willingness.”

In an indication that he would appoint cabinet ministers from different wings of the party in a bid to unite warring factions of MPs, he said he would “form a government that represents the best traditions of my party”.

He concluded his speech by saying: “Together we can achieve incredible things. We will build a future that is worth the many sacrifices and fill tomorrow and every day after with hope.” “

The speech lasted five minutes and 56 seconds – longer than all equivalent speeches by prime ministers in recent decades, except for Boris Johnson in 2019, who spoke for 11 minutes and 13 seconds.

When Liz Truss gave her first speech as Prime Minister in Downing Street on September 6, she spoke for four minutes and four seconds.

There were no MPs or political staff waiting at Downing Street to welcome Rishi Singh after he returned from Buckingham Palace.

Mel Stride, one of Mr Sink’s closest allies, emailed MPs on Tuesday morning to tell them the new prime minister would stand alone in Downing Street when he addressed the nation.

There was concern in No 10 that councilors and MPs would be celebrating at a welcome party – and Mr Sink wanted to present an image of seriousness.

“I have just been to Buckingham Palace and accepted an invitation from His Majesty the King to form a government in his name.

“It is only right to explain why I stand here as your new Prime Minister.

“Right now, our country is facing a deep economic crisis. The aftermath of Covid is still lingering. Putin’s war in Ukraine has destabilized energy markets and supply chains around the world.

“I want to pay tribute to my predecessor, Liz Truss. She wanted to improve development in this country, not wrong – that’s a great cause.

“I admired his anxiety to create change – but there were some mistakes.

“Not born out of malice or bad intentions – quite the opposite in fact.

“And I’ve been elected leader of my party and your prime minister, in part, to fix them. And that starts right away.

“I will place economic stability and confidence at the center of this government’s agenda.

“It will mean difficult decisions to come.

“But you saw me doing everything I could to protect people and businesses during Covid with schemes like furlough.

“There are always limits, now more than ever. But I promise you, I will bring that same compassion to the challenges we face today.

“The government I lead will not leave the next generation, your children and grandchildren, with a debt that we were too weak to pay ourselves.

I will unite my country not by words but by actions.

“I will work day and night to deliver you.

“This government will have integrity, professionalism and accountability at all levels. Trust has been earned and I will earn yours.”

“I will always be grateful to Boris Johnson for his incredible achievements as Prime Minister. And I appreciate his warmth and generosity.

“And I know they will agree that the mandate my party has won in 2019 is not the sole possession of any one person. It is a mandate that belongs to and unites us all. And the heart of this mandate is our manifesto.

“I will keep my promise. A stronger NHS, better schools, safer roads, control of our borders, protection of our environment, support of our armed forces, building and building an economy that embraces the opportunities of Brexit, Where businesses invest, innovate, and create jobs.

“I understand how difficult this moment is. After the billions of pounds it has cost us to fight Covid, after all the displacement in the middle of a terrible war that must be successfully seen through to its conclusion, I I fully appreciate how difficult things are.

“And I think I have to do something to restore confidence after what has happened.

“All I can say is I’m not worried.

“I am aware of the high position I have accepted, and I hope to live up to its demands.

“But when the opportunity comes to serve, you cannot question the moment, only your willingness.

“So, I stand here before you are ready to lead our country into the future, to put my needs above politics, to build a government that represents the best traditions of my party.

“Together, we can achieve incredible things.

“We will build a future that is worth the many sacrifices and will fill tomorrow, and every day after that with hope. Thank you.”