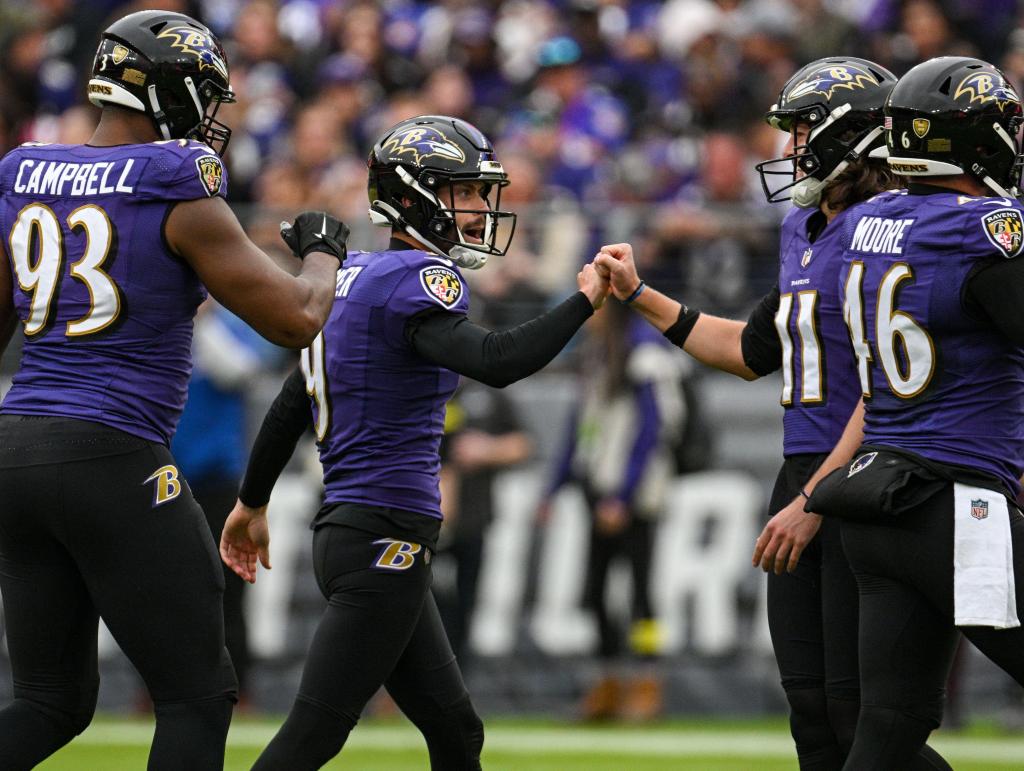 Linebacker Malik Harrison blocked a late field goal attempt, and the Ravens beat the Cleveland Browns 23-20 on Sunday to exorcise some of their fourth-quarter demons.

The Ravens (4-3) were outscored again in the fourth quarter, 10-3, but held on for a week after falling late in a road loss to the New York Giants. Quarterback Lamar Jackson finished 9-for-16 for 120 yards and 10 carries for 59 yards. Gus Edwards, back in his first game since tearing his ACL before last season, had 16 carries for 66 yards and two touchdowns.

The Ravens remained atop the AFC North despite being outrebounded 336-254. They lead the Cincinnati Bengals (4-3) thanks to their Week 5 win in Baltimore. Then comes a quick turnaround and Thursday night’s game against quarterback Tom Brady and the Tampa Bay Buccaneers, who were stunned 21-3 by the rebuilding Carolina Panthers.

The Ravens, leading 23-20, came close to putting the game away early in the fourth quarter, a period that has given them nothing but trouble this season. But after nearly six minutes into field goal range on a 12-play, 56-yard drive, running back Justice Hill had the ball punched out by inside linebacker Jeremiah Owusu Koramoh. The Browns punted at the Ravens 16 with 3:12 left.

Cleveland (2-5) drove to the Ravens’ 34, but an offensive-pass-interference penalty on wide receiver Amari Cooper and a false start penalty on fourth down forced York to punt for his long attempt. What did Harrison, an Ohio native and former Ohio State star, got a finger on the ball, and it fell well short of the goal line.

The Ravens offense wasn’t pretty on Sunday. They went up 20-10 midway through the third quarter with the help of their defense and strong offensive drive. Edwards’ 1-yard run on fourth-and-goal was the eighth play of a 25-yard touchdown drive started by defensive end Kelis Campbell, who had a streak of quarterback Jacoby Brissett (22-27 for 258 yards). Outside linebacker Odafe bounced into Oh’s grasp.

While their offense fizzled — star tight end Mark Andrews, who was limited in practice all week, went without a catch — the Ravens could at least rely on their special teams. Kicker Justin Tucker had three field goals, including a 55-yarder to extend their fourth-quarter lead to 23-13, while Devin DuVernay set up a 34-yarder with a 46-yard punt return.

Defensively, he had his ups and downs. After a troubled first half, the Ravens forced three straight second-quarter punts and a third-quarter turnover, allowing just three points over the 30-minute span. But the Browns ran at the Ravens to open the fourth quarter, driving 75 yards and reaching the end zone in just 2:24, cutting their lead to 23-20 with nine minutes remaining.

The Ravens’ first half didn’t follow their usual script. Through the first six weeks of the season, they allowed just three points in the first quarter. They did not give up a score on their first defensive possession. They never backed down.

That all changed quickly. Seven minutes in, Browns running back Nick Chubb (16 carries for 91 yards) capped the game’s first drive with a 2-yard touchdown run. Eight minutes later, kicker Cade York kicked a 41-yard field goal. The Browns took a 10-3 lead into the second quarter, with Brissett going a perfect 7-for-7 for 121 yards.

As the Ravens’ defense stabilized, their offense bounced from one extreme to the other. After a spirited opening drive into the red zone, the Ravens went three-and-out and then settled for another field goal in Browns territory after a 5-yard drive. They didn’t take their first lead until Edwards, making his first appearance since January 2021, ran from 7 yards out for a 13-10 lead with two minutes remaining.