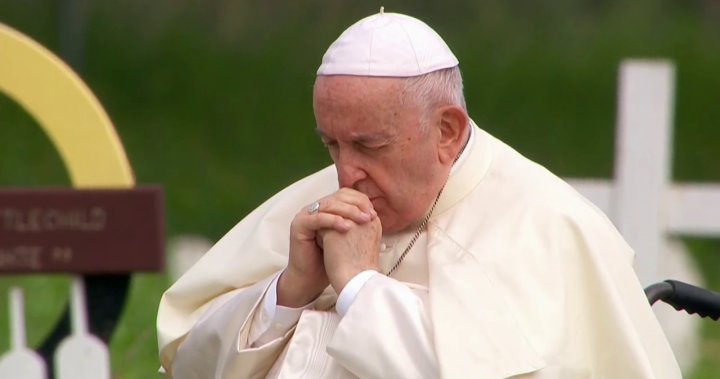 As of Wednesday afternoon there may be standing room only at the Plains of Abraham in Quebec City.

Tens of thousands of people are expected there to see Pope Francis, who will arrive in Alberta on the second leg of his visit to Canada. Speaking out about and apologizing for the abuse of indigenous children in church-run residential schools across the country has been called a journey of penance.

The head of the Catholic Church, the Pope, will make two stops in Quebec.

The first stop is in the provincial capital where he will meet with government officials including Prime Minister Justin Trudeau and Governor General Mary Simon at the citadel shortly after arriving from Jean Lesage Airport.

After that he will address the public. People gathered at Maidan Ibrahim will be able to watch on big screens.

He will then make a brief tour of the plains in the Pope Mobile to greet those who are expected to meet him there. Authorities are warning people of road closures and advising them to use public transit.

All tickets for Thursday’s gathering in Saint-en-de-Beaupre, northeast of Quebec City, have been sold out. At large, where he is expected to address former residential school students and their families, is the highlight of his visit to Quebec.

“It was important for him to come here and tell the situation, the recognition of what happened, the involvement of the Catholic Church,” Lepine said.

Pope Francis will lead mass at one of Quebec’s basilicas, a local pilgrimage site

Before the Pope leaves for Iqaluit on Friday morning, he is scheduled to meet with a delegation of indigenous peoples from eastern Canada.

This is the pope’s fourth visit to Canada, but only the second time a pope has visited Quebec. The last papal visit to the province was in 1984.

For the visit, despite the large crowds expected, local leaders are advising the public that the visit is not a celebration, but an important opportunity for residential school survivors.

The Indian Residential Schools Crisis Line (1-866-925-4419) is available 24 hours a day for anyone experiencing pain or distress as a result of their residential school experience.