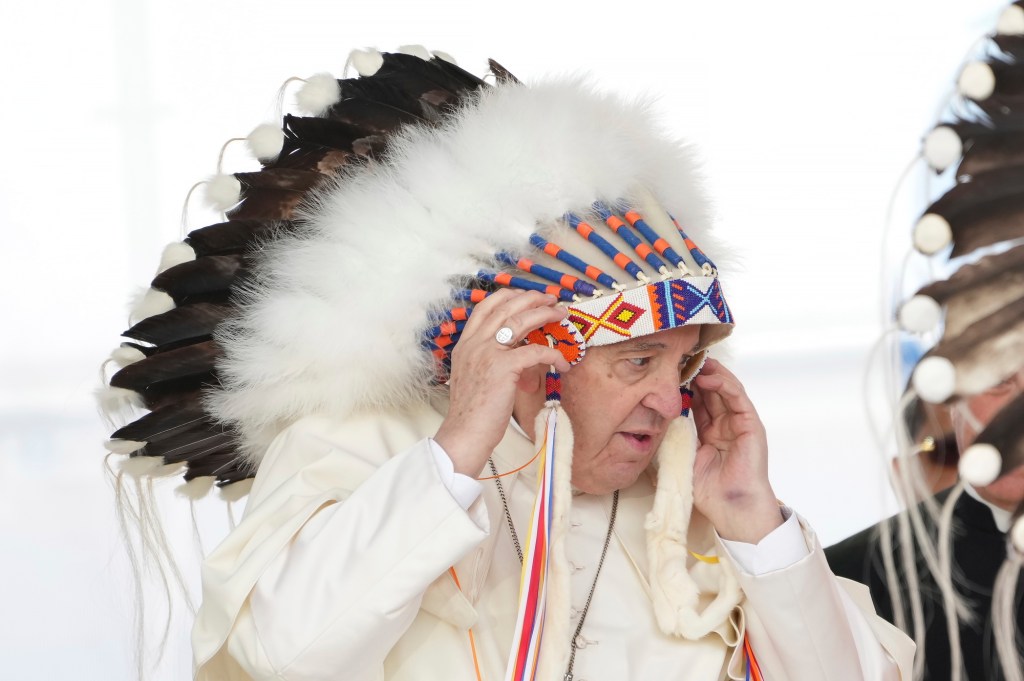 It was a striking image: Pope Francis briefly wore a full indigenous headdress, its rows of soft white feathers attached to a colorful, beaded headband as he held a Mass for Indigenous Children in Canada. Apologized for the Catholic Church’s role in the “disastrous” residential school system.

Chief Wilton Littlechild, a residential school survivor himself, gave Francis the headdress on Monday, placing it on his head to the cheers of an audience in Moscow, Alberta, which included many of the school’s survivors. were included.

The Vatican and the Pope clearly appreciated the gesture: Francis kissed the hands of the little child after receiving the headdress, something he has done in the past as a sign of respect for Holocaust survivors. And what’s on this journey for residential school survivors?

The Vatican clearly understood the symbolic importance of the moment, placing the photo on the front page of the Vatican newspaper L’Osservatore Romano under the headline “I humbly apologize.”

Historically, headdresses are symbols of honor, worn by Native American war chiefs and warriors. For many steppe tribes, for example, each feather placed on a headdress held significance and was to be earned through acts of compassion or bravery. Some modern-day Native American leaders have been given war bonnets in ceremonies accompanied by prayers and songs.

Not everyone was happy with Little Child’s actions. Some members of local tribes said they found the gesture inconsistent with past mistakes in church-run schools for which Francis apologized.

Russ Diabo, a member of the Kahnawake Mohawk tribe in Canada and an indigenous lawyer and policy analyst, called the scene “prescient” and the Pope’s statements “convenient.”

Diabo said on Twitter that “The Catholic Church and Canada are collaborating to create a myth for a joint ‘reconciliation’ agenda as told by prominent federal collaborators/residential school survivors!”

“I have a lot to say about this, and it’s all negative,” tweeted Joe Horsecapture, vice president of local collections and curator of Native American history and culture at the Autry Museum of the American West in Los Angeles.

“I’ve been practicing the ‘if you can’t say something positive, don’t say anything at all’ mantra. But I’ll be honest, it’s hard!”

Black Elk wrote, “The conversation around the #PopeFrancis headdress is unfortunate. “He didn’t call for it. It was not his fault. But it is also clear that the givers did not consider how it would make other local people feel.

Black Elk later said in a telephone interview that the mixed reaction to the pope’s headdress “reflects the reality of Indigenous peoples and our need for more dialogue” about the past.

“I think Chief Littlechild felt it was important to honor that moment, and it was an important moment,” he added.

A spokesman for Little Child did not immediately respond to a message seeking comment Tuesday.

But Kishan Littlechild used a Facebook post to defend her grandfather for giving Frances one of his many headdresses.

“It bothers me to see people beating my grandfather and I understand how much respect is needed to give someone a gift, but at the end of the day he has to come to Moscow to apologize to the Pope,” he wrote. were showing respect for,” he wrote.

Jon Currier, a First Nations elder and residential school survivor, said during a news conference after the pardon that the gesture meant tribal leaders “adopted him as one of our leaders in the community.

Mary Anne Daywalker Pelletier, former chief of the Okanaise First Nation, told CTV, “I thought it was great. I think now is the chief of all chiefs.

Nicole Winfield and Peter Smith in Moscow, Alberta, and Rob Glaze in Toronto contributed reporting. Snow is reported from Phoenix.