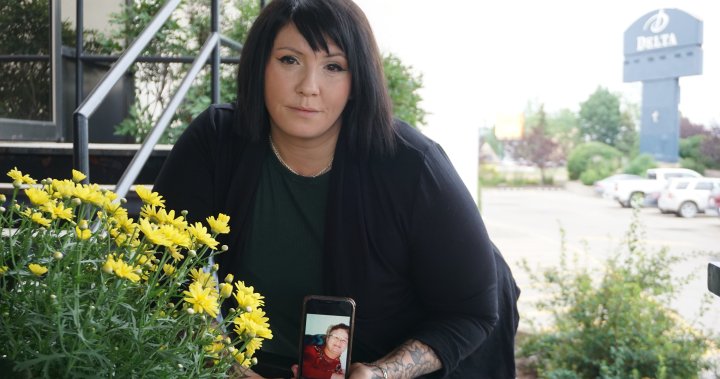 Warning: This story deals with disturbing subject matter that may upset and trigger some readers. Discretion is advised.

Sherry Mitchell sat quietly in her seat at the arbour in Maskwacis, Alta., as Pope Francis made his second formal apology for the grave harms of residential schools.

A small Métis flag carefully positioned in her jean jacket pocket and a bright sash draped across her shoulder, she listened as the Holy Father condemned the “disastrous error” of residential schools and their “catastrophic” consequences.

“It is painful to think of how the firm soil of values, language and culture that made up the authentic identity of your peoples was eroded, and that you have continued to pay the price of this,” he said via a translator to a captive audience of more than a thousand people.

“I humbly beg forgiveness for the evil committed by so many Christians against the Indigenous peoples.”

At these last words, some survivors, youth and elders let out whoops of celebration in between loud applause. Others remained silent, arms folded in their seats. Some cried out in a flood of relief, others in pain and sadness.

The 85-year-old pontiff rose to accept a headdress from his hosts and smiled as he accepted other gifts and tokens of appreciation.

Like many others attending the “penitential pilgrimage” on Monday, Mitchell’s focus was not on herself or the Pope, but her mother – a residential school survivor – and her 12-year-old daughter, Bella.

“I need her to know why I am the way I am sometimes or why I might just burst out into tears, or why I do hold on to faith in God and knowing that other people are only human,” she said in an interview from Edmonton.

“We have to be really proud and we have to carry this in dignity going on for our mother’s legacy.”

Many parents brought their little ones to the arbour. Bella attended the Sacred Heart Church of the First Peoples in Edmonton after the ceremonies in Maskwacis.

The papal tour is a “teaching tool,” Mitchell said. She was about the same age as Bella when her own mother began to divulge the dark truths of their family history.

“This is just me doing what my mom would want me to do,” she said.

“It was my mom’s dream – before she passed, when she found a family … with the Bible in hand, she said, ‘I just want (the Pope) to say sorry for what they did to us little kids.”

Mitchell now lives in Victoria, where she works as an office administrator for the Métis Nation of Greater Victoria. She was 17 when she learned she was Métis; it was the same day her mother announced that after years of searching, she had discovered who Mitchell’s grandmother was.

“She was just beside herself in tears and crying and she’s like, ‘I’ve always wanted to tell my mom that I love her and I forgive her, and I knew it wasn’t her fault,’” Mitchell recalled.

Her mother, Virginia Mary Kintop, was dropped off on the doorstep of the O’Connell Institute in Edmonton by Mitchell’s grandmother, Agatha MacDonald, in 1945. MacDonald had given birth at a young age, Mitchell said, and asked the nuns at the home for girls to care for Kintop until she was ready.

Full text of the Pope Francis’ residential school apology: ‘I am deeply sorry’

But when her grandmother came to retrieve her, Mitchell said, the nuns told her Kintop wasn’t there – and had possibly died.

Kintop herself spent 16 years at the O’Connell Institute not only believing she was an “orphan,” but that she had been “thrown away” by her birth mother.

“They made (Kintop) sing a song about how (MacDonald) had thrown her away to be treated this way,” Mitchell said.

“They made them lay on their backs, naked, singing, kicking their legs and being sprayed by water. The stories are dark.”

Canada’s harrowing residential school system, sponsored by church and state, locked away more than 150,000 First Nations, Métis and Inuit children in an effort to strip away their Indigneous identities. The love, language and rich culture they would have known with their families were replaced by cruelty, indifference and indoctrination.

Countless among them were subjected to sickening physical, sexual and spiritual violence, leading to intergenerational trauma. Thousands died from abuse, malnutrition and disease, but the true number of children who never came home is not known.

Since the spring of 2021, First Nations across the country have used ground-penetrating radar to detect well over 1,000 suspected unmarked burial sites. The searches are still underway.

Mitchell’s mother made it out of the O’Connell Institute and spent two years in foster care. By the time she aged out, however, she “didn’t know how to be a parent – she didn’t know how to do a lot of things,” according to Mitchell.

“My mom’s life was stolen. It was completely stolen. She had no quality of life,” she said. “She was always half a person.”

Kintop died in 2009, but not before she hired a researcher to track down answers to her burning questions about where she came from. The family always knew they were Indigenous, Mitchell said, and while several First Nations in the Edmonton area had accepted them as their own, finding out they were Métis opened a new door to healing.

“We’re Métis and proud, and now I’m in my role and I get to learn about what it means every day. We call it the rabbit hole. It’s never ending – there’s just so much great knowledge,” she said with a smile.

“Now all of these new up-and-coming different things that are happening, you know – the truth and reconciliation movement – it’s just a really great time to shine and be Indigenous and also be an intergenerational survivor.”

‘This is our moment’: Phil Fontaine on significance, expectations for Pope’s visit to Canada

The Pope’s apology in Maskwacis was met with mixed reaction. It did not, as some had hoped, contain promises of land back from Catholic churches in Canada, or of long-term funding from Vatican coffers for healing and reconciliation.

He did not promise to return Indigenous artwork or artifacts plundered from their people over the years, nor did he address calls to revoke the centuries-old papal decrees that enshrined the Doctrine of Discovery – a legal framework that gave early Christian explorers permission to conquer, displace and enslave non-Christian Indigenous Peoples.

Instead, Pope Francis asked for forgiveness for the ways many Christians cooperated in “projects of cultural destruction and forced assimilation promoted by governments of that time,” while acknowledging no apology from him will “ever be sufficient.”

“That is only the first step, the starting point,” he said in Spanish via the translator.

“It is my hope that concrete ways can be found to make those peoples better known and esteemed, so that all may learn to walk together. For my part, I will continue to encourage the efforts of all Catholics to support the Indigenous Peoples.”

Steve Stamp, a survivor of the Timber Lake Children’s Home in Saskatchewan, said the day met his expectations – which were not high.

He had hoped the pope would acknowledge Timber Bay survivors, but said he didn’t even see the institution’s name printed on a 50-metre red banner bearing the names of 4,120 documented children who died in residential schools, which was carried around the arbour.

“I was hoping to get surprised but I didn’t get surprised. I’ve always been treated like this and I think most of us were,” Stamp said.

“It’s just a word in English,” the intergenerational survivor told OlxPraca, adding that he was “really offended” that Pope Francis received an eagle feather headdress.

“The society that had murdered so many of our children – and you’re putting a headdress on this person?” he exclaimed in a phone interview after the event.

Pitawanakwat, a language and knowledge keeper from Three Fires Confederacy on Wiikwemkoong territory on Manitoulin Island, Ont., said he will “reserve judgment” on the rest of the tour while he carries out his translating duties.

The Maskwacis ceremony was difficult, he added, as he must shelve his personal feelings about any subject matter to provide a professional and accurate translation.

Mitchell has never revealed her family’s story in the media. Sharing it, attending the papal visit and bringing her daughter are not only part of her healing journey, she explained, but a part of her mother’s healing journey that she is completing on Kintop’s behalf.

From her perspective, Pope Francis is “not the one who did it” and his actions are “honoured and totally welcome.” She said she would, however, like to see a more concrete commitment from the Vatican, and suggested reforming some of the restrictions on priests and nuns that she believes contributed to residential school abuse.

“Let them get married … these are human beings,” she said. “As for land, why not? Give the Indigenous people back something for all the lives that were stolen and the lives that continue to be affected from what happened in those days.”

‘Career top five’: Meet the Métis delegate whose beadwork was gifted to the Pope

Mitchell’s mother was impacted by her residential school experience her entire life, leading to intergenerational trauma in their family. She said her older brother and sister took on a little more than she did, but none of them blame Kintop for any of it.

Their mother had “a big childlike spirit and the biggest heart,” Mitchell said.

“As much as there’s that pain, my mom was a champion at surviving and saying, ‘Hey, there can be better days,’” she said.

“She was the cutest person you’d ever meet. All my girlfriends called her mom too … I love my mom and it still hurts to be without her.”

The O’Connell Institute opened in 1928 and was operated by the Sisters of Our Lady Charity. It was never recognized as a residential school in the landmark 2006 Indian Residential Schools Settlement Agreement and some survivors, including Kintop, sued privately for compensation.

She received a small amount of cash – “peanuts,” said Mitchell – but the papal tour would have brought her more healing than money ever could.

Pope Francis is set to meet with Prime Minister Justin Trudeau and Gov. Gen. Mary Simon in Quebec City on Wednesday to discuss reconciliation. It’s a reckoning she said her mother predicted after seeing Pope John Paul in Edmonton in 1984, with a young Mitchell sitting atop her shoulders in the crowd.

“Just knowing that this is kind of breaking through at such a time and I get to see it in my lifetime and my daughter’s – it means the world to me,” she told OlxPraca.

The Indian Residential Schools Crisis Line (1-800-721-0066) is available 24 hours a day for anyone experiencing pain or distress as a result of their residential school experience.

The Hope for Wellness Help Line offers culturally competent counselling and crisis intervention to all Indigenous Peoples experiencing trauma, distress, strong emotions and painful memories. The line can be reached anytime toll-free at 1-855-242-3310.