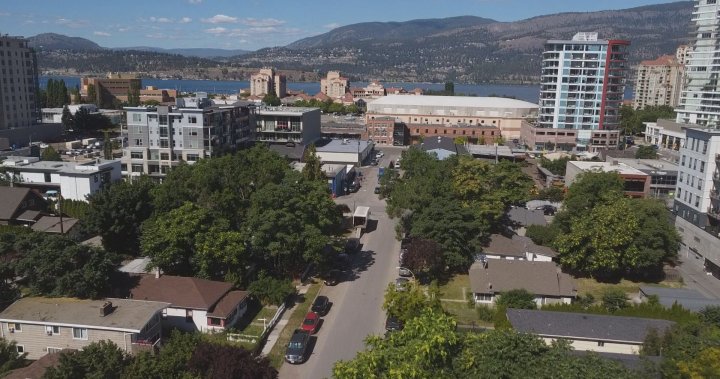 Kelowna City Council has rejected a rezoning application that would see three high-rises built on Coronation Avenue. The decision comes after city staff recommended against the development.

Safari Capital’s proposal is to redevelop 16 properties on the south side of Coronation Avenue. The three towers will be constructed in heights of 33, 27 and 20 storeys, including a podium used for above-ground parking. The buildings will include condos, rental apartments, a hotel and commercial space.

City Development Planning staff were not supportive of the request to redevelop the properties.

“Staff has made a negative recommendation not to proceed with further site planning,” said City Councilor Lyle Woolridge. “Mostly because it was premature, knowing that we currently have other decisions downstream with UBC, as well as some other high-density towers in the downtown area.”

City staff also raised concerns about building heights and high density at the site, which has an estimated 708 units proposed. Wooldridge worries about the overuse of concrete for podiums spanning an entire city block.

“I think it’s going to make that area and the city neighborhoods east of that area very uncomfortable. We’re not following our OCP at all, we’re basically changing it significantly. ” said Councilor Luke Stack.

However, the council could review the Coronation Avenue development and encourage the developer to submit a better plan to city staff.

Concerns are also being expressed by city councilors and the public over two more proposed towers in downtown Kelowna. Public hearings are being held Monday night for two of the requested height variances.

“We will be looking at amending the land use text for the new UBCO campus and it’s not about the look and character, it’s about the use of that land,” Wooldridge said.

“We are looking at the layout of the Doyle Avenue project which is being proposed for a 26-storey purpose-built rental building.”