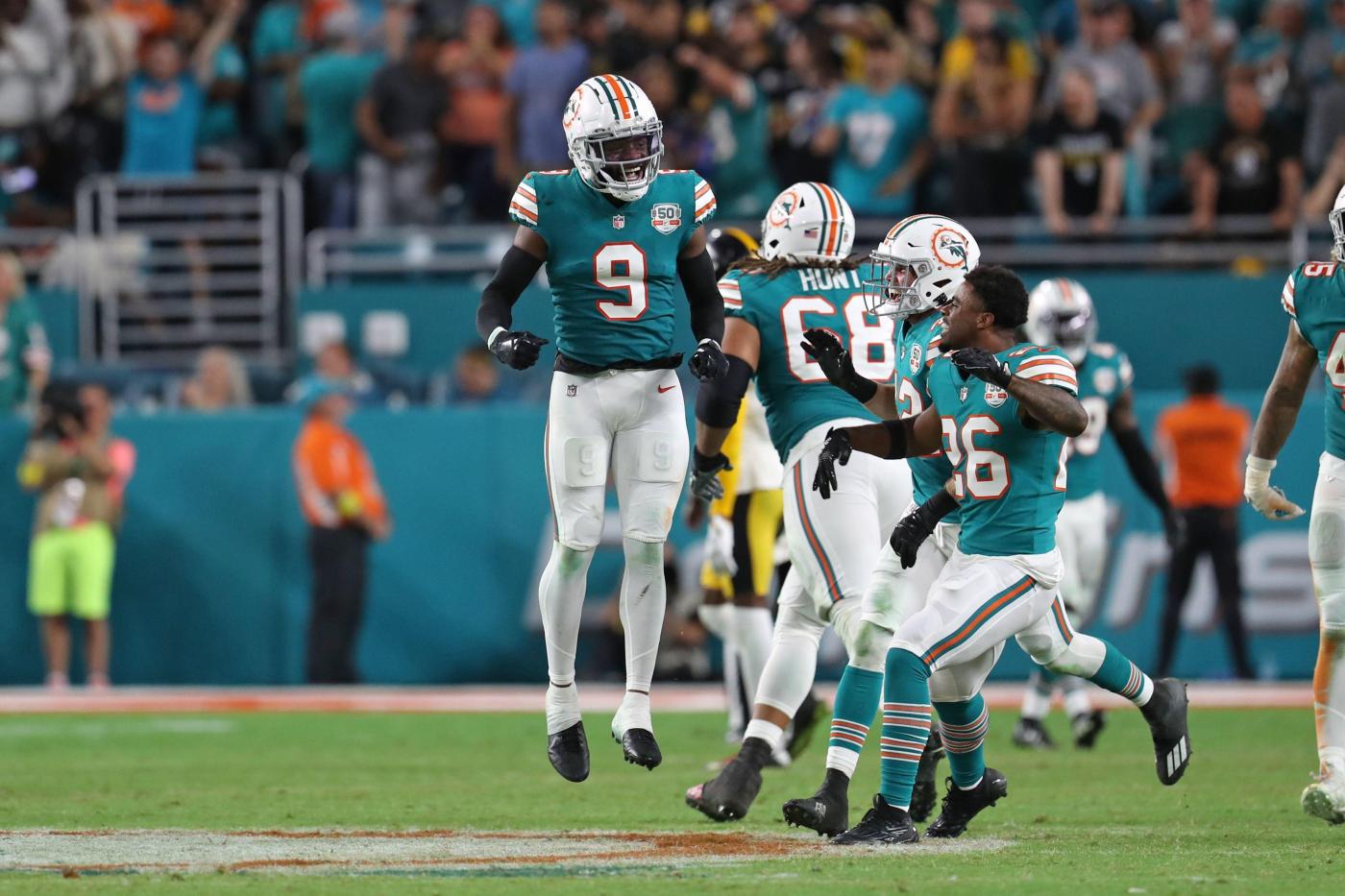 After the Dolphins’ season-opening victory over New England, coach Mike McDaniel announced that the team belonged on defense.

The defense, and the secondary, in particular, is the strength of the team, leading to the Dolphins being 4-3, and in the running for the AFC playoffs.

But this offense doesn’t produce enough touchdowns, and it doesn’t win games. Not yet, anyway.

Offense is more creative than ever. But that 21-point-per-game average is reminiscent of the Joe Philbin era, the 2012-14 seasons when the Dolphins averaged 18, 19.8 and 24.3 points per game, respectively.

In other words, at this point, if the Dolphins make the playoffs, it will be because of the defense.

And the next few games set up especially well for the Dolphins defense to continue the way they carry their team.

Consider how the Dolphins’ injury-riddled defense, led by defensive coordinator Josh Boyer and a talent-rich secondary, fared on the Steelers.

You saw the defense, which lost Brandon Jones to a knee injury in the third quarter, lead against the Steelers, with interceptions between cornerback Justin Bethel, safety Jeon Holland and cornerback Noah Agbenoghen, the last Two coming in the final three minutes of game two and stopping the victory that snapped a three-game losing streak.

“At first I didn’t think I caught it because the ref over there said it was out,” Agbinoghane said of his game-clinching play with 18 seconds left. “I saw the reviews, and I saw that everyone was excited and I was excited. I got this intervention, and it’s my first. It’s a blessing.”

You also saw the defensive lead with safety Clayton Fejdelam making a key stop on a third-and-1 run by Steelers running back Najee Harris early in the fourth quarter.

“It was just a good defensive call,” Fejedelem said. “Edge pressure, third-and-1, I was able to come off the edge and finish it. Naji Harris is a great back, so to get him on the ground, get out there, it’s just taking advantage of those opportunities. “

And you saw the defensive edge with guys like safeties Veron McKinley and Eric Rowe and defensive lineman Ben Steele. McKinley and Stille, a pair of undrafted rookies, made their NFL debuts.

“You’re ready,” McKinley said of the mindset of the Dolphins reserve defensive player.

And then there were guys like linebackers Jaylan Phillips (1.5 sacks) and Andrew Van Ginkel, who tied for the team lead with eight tackles.

Holland talked about the defense’s ability to make “splash plays,” which are turnovers and big stops.

“I know as a defense that all of our defensive players can make that ‘splash play,’ no matter who you are,” he said. “And I think that happens in our preparation. And when we have a chance to prepare, there are splash plays. And you see that today with Noah, with Justin Bethel, with [Phillips]with [Van Ginkel]. People are flying around.”

Understand something: Bethel, Fejedelem, Igbinoghene, McKinley and Stille are not starters, or even in the regular defensive rotation. They’re just guys who follow the Dolphins’ defensive tendency to make plays.

You know the guys who were missing from the secondary: cornerbacks Byron Jones (Achilles), Nick Needham (Achilles), Kadir Koho (oblique) and Kevin Crosson (knee). And then they lost Brandon Jones during the game.

Still, the defense, led by the secondary, is still on the road to victory.

Offense has to find its way eventually.

For that to happen, Hill, the obvious choice for team MVP and the NFL’s leading receiver with 773 yards, must continue to ball. The same goes for Tagovailoa, Armstead and Waddle.

And the offense as a whole should be much better.

In the meantime, they can rely on the defense’s game-changing, game-winning qualities.

Because right now, the Dolphins have the best hope of making the playoffs.