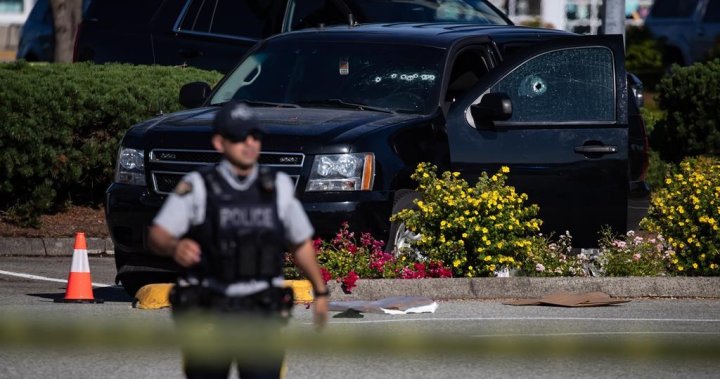 The chief of the British Columbia RCMP says police are focused on ensuring public safety and combating an increase in gang violence in the wake of a recent spate of shootings in the province over the past week.

The news conference was held hours after a series of shootings in Langley City and Langley Township overnight left two people dead and two others wounded. The suspect was later killed by the police on Monday morning.

3 dead, including suspect in Langley, BC shooting: Shooter identified

The shooting comes a day after two people were killed in a targeted shooting in Whistler on Sunday, which police say was linked to a broader gang dispute in the Lower Mainland. Police announced Monday that two men are facing murder charges in connection with the shooting.

Two women were killed and a man was injured in a shooting at a home in Chilliwack on Thursday. The suspected gunman in the shooting was found dead Monday after spending days on the run from police, MacDonald confirmed.

While police say there is no longer a public safety threat associated with the Langley and Chilliwack shootings, resources are being devoted to making sure the gang-related Whistler shooting doesn’t lead to more violence.

McDonald said agencies responsible for combating gang violence in BC, including the Combined Forces Special Enforcement Unit and special units of the RCMP, are meeting to discuss the rising crime rate.

“It is our hope that any retaliation for this particular incident in Whistler will be minimized, but I can say that we have a number of ongoing investigations into these gangs and we have I’m sure we can put a lid on it,” he told reporters.

“If there are gunshots going around, the public is at risk, and it’s our job as police to stop that, to remove that threat, and make sure it doesn’t happen again. I can guarantee that I, all of the RCMP and our municipal agencies are dedicated to this cause.

Murder charges have been filed in a gangland double shooting in Whistler.

At a separate news conference in Victoria, Public Safety Minister Mike Farnworth praised the actions of police who responded to the Langley shooting and are investigating other recent acts of violence.

“They work hard 24 hours a day, seven days a week to keep us safe, and their passion and commitment to public service is redoubled because of the events we’ve had in the past few years,” he said. have seen in days,” he said. .

He later defended the police’s use of emergency alerts for the Langley shooting, despite some criticism that it reached more than necessary and sometimes shared incomplete information, causing some confusion.

Although he said police were dealing with a “political situation” at the time, he said lessons were learned from the active shooter threat in Vanderhoof last year, such as emergency alerts and the 2020 mass shooting in Nova Scotia.

The minister added that a review will be done on how the alerts were managed to ensure that more lessons are learned for future incidents.

Farnworth issued a joint statement with Premier John Horgan in response to the Langley shootings, calling them “deeply disturbing and unacceptable”.

“With today’s tragic events, we reaffirm our government’s commitment to addressing gun violence in all communities across BC,” the statement read.