Official figures show that at least 70% of people in England have recovered from Covid, but the real toll will be even higher.

At least seven out of 10 people in England have had Covid, according to new official statistics, which are likely to be underestimated.

For the first time, official data on the overall incidence of Covid have been released after fierce debate about this number throughout the pandemic.

The ONS based its estimate on the results of more than 500,000 adults and children across the UK over the past two years, who were randomly selected and tested regularly by PCR.

Chief statistician Duncan Cook of the ONS said the discovery “is a valuable piece of the puzzle” for understanding the impact of Covid on the country.

But the true number of infections is likely to be higher because the report does not cover the first spike in infections in the spring of 2020 and excludes March and April, when cases hit record highs.

Estimates for the rest of the UK are much less reliable because the ONS only started collecting data in the summer in Wales and Northern Ireland, and even later in Scotland.

The Office for National Statistics estimates that between April 2020 and February 2022, 38.5 million people were infected in England, equivalent to 70.7 percent. 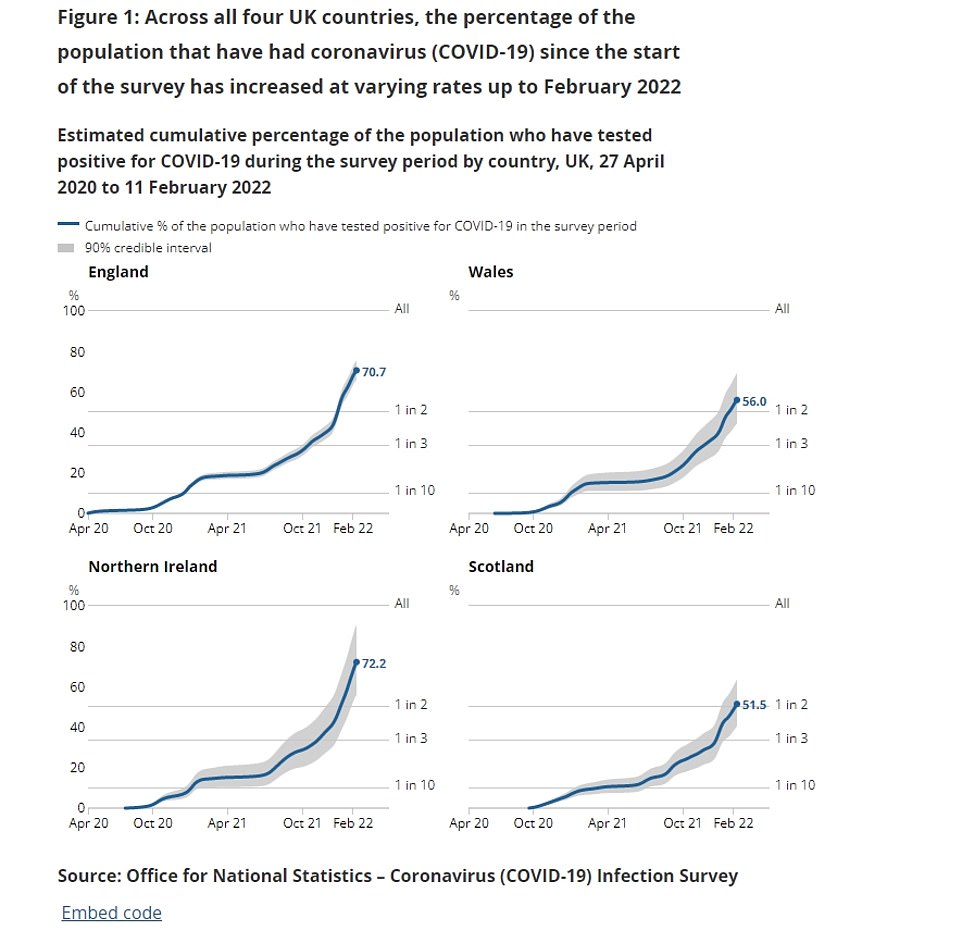 Estimates for the rest of the UK are much less reliable because the ONS only started collecting data in the summer in Wales and Northern Ireland, and even later in Scotland.

The report also estimates that 1.7 million people in Wales have recovered from Covid, or 56 per cent of the population, based on results between 30 June 2020 and 11 February 2022.

The estimate for Scotland of 2.7 million, or 51.5 per cent, is the least reliable since data collection only started on 22 September 2020.

The results were based on 535,116 people across the UK who were randomly selected after testing positive under the government’s centralized testing regime.

Participants were aged two years, lived in private homes, and were regularly tested during the entire time spent in the study.

The ONS said the data for each country in the UK cannot be directly compared to each other as they refer to different time periods.

Mr Cook, Deputy Director of the weekly Covid Infection Survey, said: “Today’s release is a valuable piece of the puzzle for understanding the impact of the pandemic on the UK.

“This analysis would not have been possible without the continued participation of over half a million people who have taken part in it over the past two years.

“We will continue to work closely with our academic partners to better understand COVID-19 and its impact on society.”

Figuring out the true prevalence of Covid has been challenging for scientists as testing was patchy early in the pandemic and reinfection became increasingly common.

A separate team tracking the outbreak at the University of Cambridge estimated that by February 51.8% of people in England were infected with Covid.

But even the higher percentage of ONS for England is likely to be an underestimate due to the sheer number of infections missing from his analysis.

It does not include the crucial months of February and March 2020, when the first wave began and triggered the first national lockdown.

Scientists then estimated that up to 100,000 people were contracting the disease per day at the peak of the first outbreak, but the true prevalence of the virus remains unknown due to a lack of testing at the time.

The analysis also excludes March and most of April this year, when millions of people were thought to be infected with the virus every week.