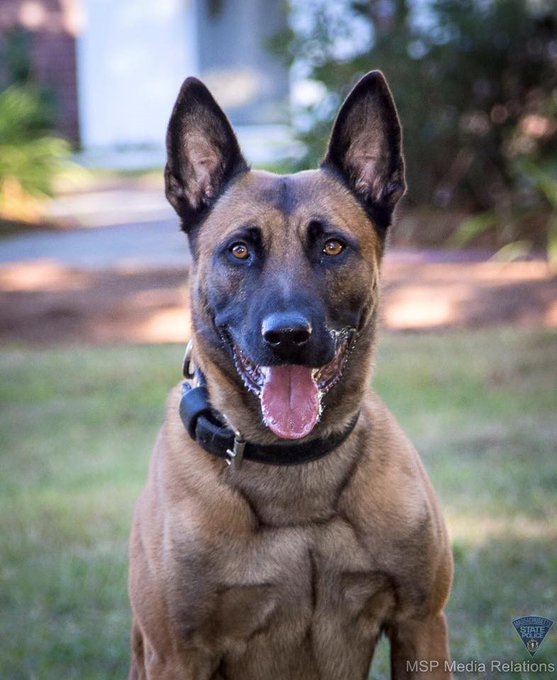 A state police K9 at large was shot and killed during a standoff in Fitchburg Tuesday afternoon, a “heartbreaking” loss as Frankie became the first MSP canine to be killed in the line of duty. .

Frankie, a 10-year-old Belgian Malinois who had been a member of the Mass. State Police for nine years, was shot and killed while trying to apprehend a wanted fugitive who had barricaded himself inside a residence. Frankie’s handler, Trooper David Stosinski, was not physically injured.

“His sacrifice will never be forgotten,” Colonel Christopher Mason said at a press conference announcing Frankie’s death. “Frankie possessed every trait we look for in a good law enforcement officer, canine or human: intelligence, immense courage, and a dedication to public safety. He was as loyal a companion as any trooper.

“He was a beloved member of the Massachusetts State Police family and the Stosinski family,” Mason added. “He, like any human member of the department, was one of us and a part of us.”

The fugitive suspect — Matthew Mack, 38 — later died after apparently shooting himself inside the three-story multifamily home at 40 Oliver St.

Mack was wanted on warrants charging him with felony firearms and possession of a firearm after a shooting incident in Fitchburg last week.

When troopers made verbal contact with Mack, he refused to come out of the house. Negotiators held several talks with Mack, as well as his family members, to persuade him to surrender peacefully.

Then at about 2:48 p.m., Mack was seen in the rear of the house, and police tried to apprehend him. Frankie and his handler approach the rear, and Mac fires multiple shots, killing the K9.

The troopers picked up Frankie, and took him from the scene to an ambulance. He was taken to Wachusett Animal Hospital in Westminster, where he was pronounced dead. Ambulance transport was the first example of such emergency care made possible by Nero’s law.

Frankie was a highly decorated member of the Massachusetts State Police. In 2017, he and Stosinski were awarded the Medal of Valor at the state’s annual George L. Hanna Awards for Valor ceremony, the state’s top law enforcement award ceremony.

In 2014, Stucenski and Frankie won three awards from the American Police Canine Association for evidence recovery, agility and other law enforcement skills.

Just last month, MSP honored Stosinski and Frankie and other members of the Special Tactical Operations Team for apprehending an armed child pornography suspect who opened fire on them while he was at a West Springfield motel in 2019. Went to arrest.

“Today we mourn the killing of our co-worker, friend, and fellow member of the Massachusetts State Police,” the Massachusetts State Police Association wrote. “We ask for privacy and respect for K-9 Frankie, his handler, family, and those who know him during this heartbreaking time. Our deepest thanks to the first responders and medical staff. who tried their best to save the life of K-9 Frankie.