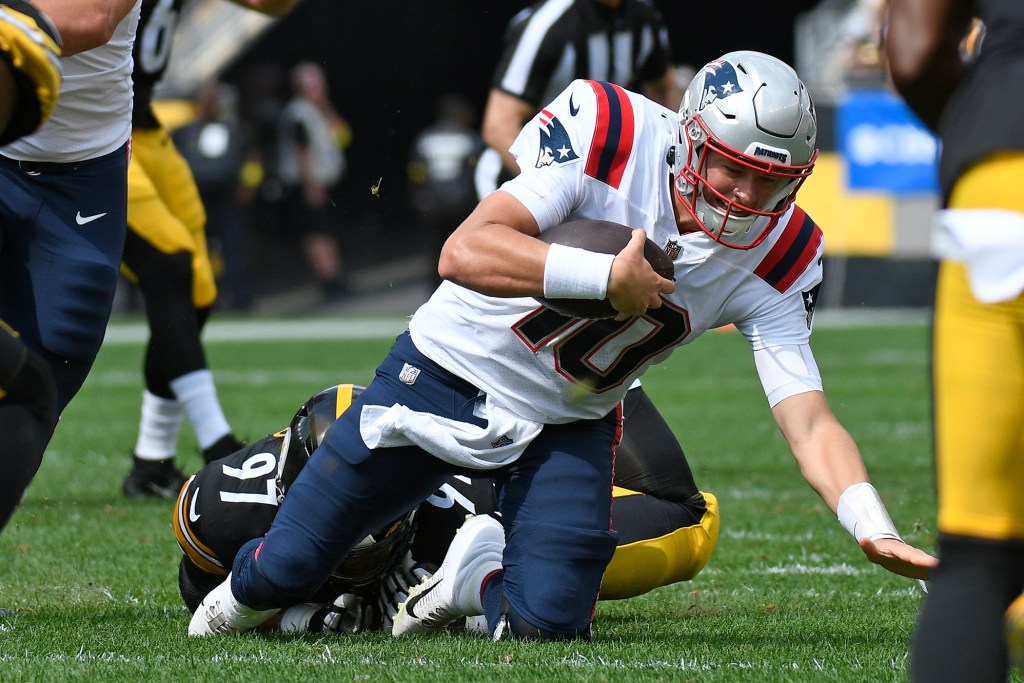 FOXBOROUGH — Before the Patriots walked onto the practice fields this summer, before taking a step into training camp, McJones was expected to make a leap.

After all, every high-achieving, high-profile rookie quarterback skips the proverbial Year 2, right? Last season, Jones won the Patriots’ starting job, then reached the playoffs and appeared in the Pro Bowl. Now, it was time to take this team with us.

Except progress, especially in football, isn’t always linear. So far, Jones’ average outing in Miami and subpar showing in Pittsburgh have some wondering if he’s stopping. Or worse.

Could Jones really be destined for horror? Regression?

If he continues to play like this, yes. But as a quarterback, Jones’ performance will also depend on the aforementioned players, coaches and system around him. That is the nature of the position.

Quarterback is simultaneously the most powerful and dependent position in football. A crime engine and driver all in one. But while an engine may power the vehicle and the driver steers it, neither do the wheels.

In the process of projecting Year 2 greatness for Jones, it was forgotten that he must walk before he can run and run before he can leap. And he can only make the jump if the Patriots act as a springboard. So what are they doing now?

Walk. And slowly at that, as the offense averages 12 points per game, the team is off to a 1-1 start and Jones looks like the quarterback who faltered in his rookie campaign last year.

For pocket-bound quarterbacks like Jones, leaky pass protection is the most common culprit when explaining poor play. A recent example came in the Patriots’ preseason finale, when Jones was visibly nervous at the start and end of his four-drive appearance. A performance that spent the post-summer practically dodging free rushers. And it was a meaningless game against the backups.

Except since then, stress hasn’t been — or at least shouldn’t be — a big issue.

Jones was pressured 12 percent of the time in Miami, where the Patriots emphasized quick motivation to beat the Dolphins’ blitz pressure. Jones registered the third-fastest snap-to-throw time in Week 1 at 2.33 seconds per dropback, per Pro Football Focus. In Pittsburgh, he was pressured on about a quarter of the snaps, according to the Herald’s charting, although PFF had Jones pressured 34% of the time.

So what is going on with Jones that would explain his slow start to the season? A little bit of everything else.

Through two weeks — a seemingly small sample — Jones ranks 16th in completion percentage above expectations (CPOE), a next-gen stat that evaluates each throw with difficulty, receiver field location and GPS tracking. Calculates the proximity to the nearest defender using the data.

Basically, it measures true accuracy, while traditional completion percentage rewards dunks and dunk passers who increase their numbers with easy throws. (Not surprisingly, elite names like Mahomes, Herbert and Josh Allen make the top five of the CPOE rankings.)

Right now, Jones is in Carson Wentz territory. Wentz ranks 14th with a CPOE at 0.2, and Jones sits just below average, at -1.3. But among starters last season, Jones was eighth at 2.4, and his raw completion percentage matched Tom Brady’s.

Accuracy is Jones’ superpower, so naturally when he hurts, so does he, and so do the Patriots. His other glaring miss — albeit a difficult throw — came with 11 minutes left in Pittsburgh last weekend. Facing third-and-5 at the Steelers’ 40, Jones opted for a back-shoulder feed to DeVante Parker along the left sideline, a throw he repeated over and over again this summer.

The pass fell at Parker’s feet.

Back to the fourth quarter in Pittsburgh.

After a drive completed to Parker, Jones fell shotgun on third-and-2 at Pittsburgh’s 42-yard line. He made a tight pass to Jono Smith on the left sideline, then Smith stopped outside the left hashmark to form a three-man group with receivers Kendrick Bourne and Jacoby Meyers. At the snap, Bourne charges upfield, and Smith runs a five-step stop route behind him that is expected to keep the tight end safe long enough for an easy completion.

Jones expected the same. And so did Pittsburgh.

But what the Steelers didn’t see was that Meyers was heading out to left field alone. And neither did Jones, as he instead threw a blanket to Smith, who had no chance to make the short catch to move the chains.

Now, quarterbacks miss throws all the time. But based on the route concept and Pittsburgh’s alignment, it’s clear that Jones had already determined where he was going to go with the ball. And while that’s often wise, especially for a quick and accurate quarterback like Jones, an extra second would have led to Meyers, a first down and maybe more points.

Returning to Miami, Jones made another questionable decision on the Pats’ inaugural campaign. Facing a six-man blitz, he created a fade route for Parker to work against Dolphins Pro Bowl cornerback Zavin Howard on the right side. Starting with 50-50 balls in Parker is not a bad idea in itself.

But against Howard, a top-five corner in the entire league? It’s not a 50-50 proposition. This is asking for trouble.

Finally, Jones’ second interception — another deep pass to Parker — was a seven-throw against Pittsburgh. The Steelers were in Cover 2, a defense susceptible to a pass thrown by Jones: straight downfield between each deep safety. Parker even had linebacker Rob Splaine behind in coverage, a good sign.

The closest safety to Parker besides ball-hawking All-Pro Minkah Fitzpatrick, who the Patriots didn’t occupy or threaten a vertical route to. So Fitzpatrick did what any ball-hawking safety would do: He spotted Jones, spun toward the incoming pass, which faded behind Parker, and picked it off.

So far, the Pats are running a starting offense.

So far, most of their intermediate to deep passing game has been built on over routes or backside digs, where a receiver cuts inside after running 12 to 15 yards upfield. He has called seven play-action passes. yesterday He has run five RPOs.

All these less used elements and/or more types of ore will make Jones’s life easier. Either by identifying the coverage pre-snap, misdirecting the defense or taking free yards given by the alignment of the defense.

The good news is that the Patriots stepped up their offense in Week 2. All of these elements should be shown moving forward, as they did from the opener. And when they do, they should pick up Jones.

How much up? It will depend on how fast he can raise himself. It’s up to the coaches, receivers and offensive line to improve Jones.

Even after the delay, the Year 2 jump still awaits.